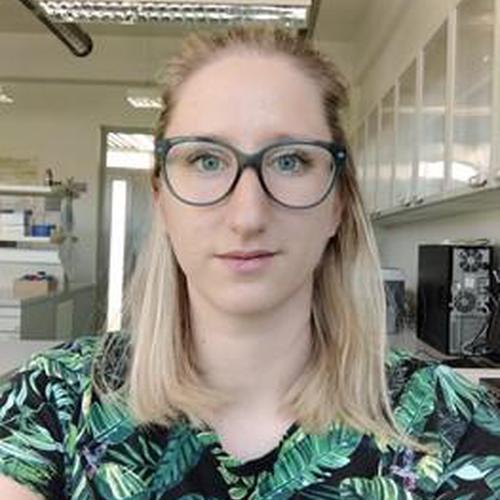 A Talk by Iris Car
University of Rijeka, Department of Biotechnology, Rijeka, Croatia

BRAFV600E mutations are found in approximately 10% of colorectal cancer (CRC) patients and are associated with worse prognosis, decreased overall survival and
poor outcomes with systemic therapies. Although BRAFV600E inhibitor vemurafenib has given promising results in treating metastatic melanoma patients harbouring BRAFV600E mutation, clinically meaningful effects were not achieved in BRAF mutant metastatic CRC due to the development of resistance. The objective of this study was to identify proteomic and N-glycomic profiles specifically associated with vemurafenib resistance in secretome from BRAFV600E mutant colon cancer cells as potential novel resistance biomarkers and drug targets for counteracting vemurafenib resistance.

2-DE/MALDI-TOF/TOF MS analysis revealed 23 differentially expressed proteins (DEPs) with statistical significance (p<0.05), among which 9 and 14 were up- and down-regulated, respectively, in resistant cells. LC-MS/MS analysis yielded 282 DEPs (p<0.05, log2(FC)>1), among which 201 and 81 were up- and down-regulated, respectively, in resistant cells. Up-regulated proteins in secretome of resistant cells were mainly enriched in DNA replication and metabolic pathways including serine biosynthesis, and were significantly associated with mRNA metabolism and splicing, and TGFB family members and WNT signalling. Down-regulated proteins mainly regulated processes related to complement and coagulation cascades, angiogenesis, interleukin and cytokine signalling and extracellular matrix organization. In addition, we were able to identify 10 N-glycan glycoforms, of which five were present only in the secretome of parental cells. Most of the identified N-glycans were composed of oligomannose, but there was a striking difference in the percentage of complex compositions between parental and resistant secretomes (11.59% vs 0.76%, respectively). Resistant cell secretome displayed elevated levels of afucosylated diantennary N-glycans in comparison to parental (18.15% vs 2.21%), but the levels of sialylation were higher in parental secretome and undetected in resistant secretome. Among triantennary N-glycoforms, levels of sialylation, particularly α2,3-sialylation, were higher in parental cell secretome.

Here, we report for the first time on proteomic and N-glycome profiling of secretome from BRAFV600E mutant colon cancer cells with acquired resistance to vemurafenib in comparison with their sensitive counterparts. Among several up-regulated features of resistant cells, serine biosynthesis emerged as a promising druggable vulnerability. Up-regulation of the enzymes regulating serine biosynthesis including PHGDH, PSAT1, PSPH and SHMT1 was previously reported as intrinsic trait of BRAFV600E mutant colon cancer cells. Increased abundance of these proteins in secretome from resistant cells supports the idea that inhibition of serine biosynthesis could be exploited therapeutically to selectively kill BRAF mutant colon cancer cells and increase their response to vemurafenib. Furthermore, we found increased level of diantennary and especially afucosylated diantennary complex N-glycoforms in resistant cell secretome in comparison to parental cell secretome. Sialylation levels of di- and triantennary compositions were increased in secretome from parental cells sensitive to vemurafenib, and this pattern was also previously reported in colorectal cancer patient sera. Differences in N-glycan compositions could be, at least partially, associated with differential expression of acute phase proteins including complement cascade and heat shock proteins, which usually carry di- and triantennary N-linked glycoforms, and whose increased expression was detected in parental secretome.